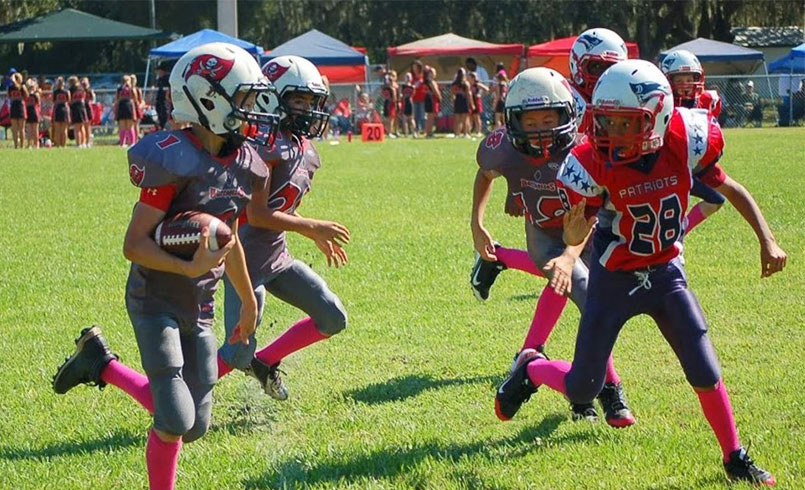 GIBSONTON – With the help of Newland Communities and Ripa & Associates, dirt excavated from the St. Joseph’s Hospital-South construction site off Big Bend Road has been used to benefit the 300 boys and girls, age 4 to 14, who play for the East Bay Buccaneers youth football league.

Based at Vance Vogel Park, 13010 Bullfrog Creek Road, for the past two years, the East Bay Buccaneers had been battling ongoing flooding issues on its playing field.

To alleviate the problem, Ripa & Associates, a site development company working on the hospital construction project, offered to donate dirt excavated from the construction site to elevate the field.

“We were grateful for the donation. The problem was, we had no way to transport it to our field,” said East Bay Buccaneers President Jason Hillman. “A hauling company told us we’d have to pay for 48 trucks to move the dirt. So we reached out to the community for help because I had no idea how we could afford that.”

The grading and installation of new sod on the playing field was completed just in time to allow the league to play its entire season at Vance Vogel Park. In past years, summer rains flooded the field, forcing the league to seek alternative locations to play its games.

“The youth football league and nearby park are invaluable community assets,” Parisi said. “We all wanted to pitch in and give the East Bay Bucs a home field they were proud to play on.”

In the coming months, Hillman said the league also is looking forward to getting a new lighted practice field.

The Hillsborough County Commission’s recent approval to build a South Shore YMCA on 36 acres at Vance Vogel Park will result in the East Bay Buccaneers losing its practice field when construction begins after the first of the year.

The commission agreed to donate $2 million for the first phase of the YMCA project, including three multipurpose fields, a playground, picnic pavilion, covered basketball court, parking and drainage, to be completed in April 2015.

“The county has agreed to rearrange the lights so we can have a practice field in a different part of the park,” said Hillman.

Meanwhile, the 27-year-old nonprofit youth football league is seeking donations for a new set of bleachers. Anyone who can help should contact Hillman at (813) 267-3223.